I watched with my own eyes, about 100 feet from Huston Street in Minute Maid park, as he got touched up and fell apart only to regain himself in time to head into extra innings. We would end up losing that game. What a difference a little bit of confidence and a five game win streak can make. Make that six with the win tonight.

Tonight, warming up in the bullpen, I saw a different Street. Hungry and confident he did his own thing and I knew it was going to be a different outcome.

That’s the face of confidence. Hell that belongs on a Wheaties box.

Lake Michigan was cloudy this morning and the water was freakin cold, but I knew the Rockies would continue to stay hot. They are hitting on all cyclinders and tonight was not the night for it to end. 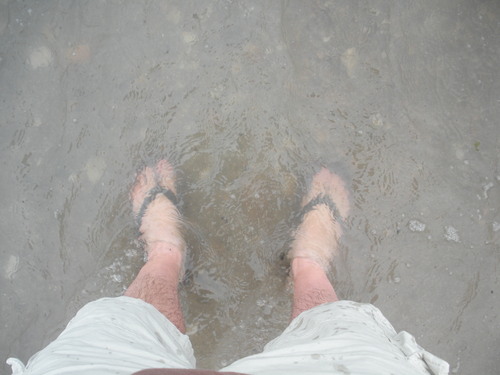 Some old faces joined the team. Ianetta, done with his rehab start, looked to make an instant impact. I asked Phillips if he knew if he was going to be getting any regular playing time since Chris was back. I just got a who the hell knows look. I told him I hope he got some good backup time because he was swinging a good bat. We’ll see.

The bullpen was relaxed and you can see an overall feeling of things could be getting better with the guys. You see a few more smiles, but nobody is thinking the team is out of the proverbial woods. Although watching Manny find a walkie-talkie and mess around with it made for some in between innings amusement.

The walkie belonged to a Miller Park crew member, but I’d would have loved to have heard the response from the person on the other end! Tell me I’m not the only one with that photo : )

I was rocking my old school Colorado Springs Sky Sox hat and some really nice folks from Pueblo, Colorado who had flown in for the game, decided to chat me up. 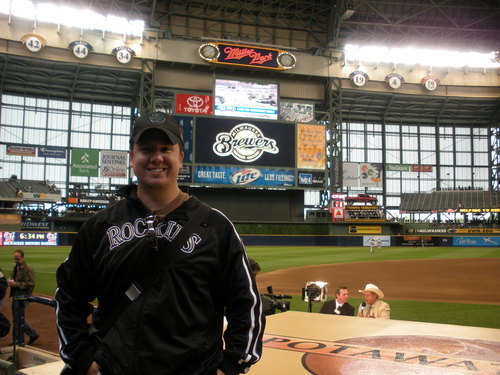 T.J. and Tyler took a day to fly in and I let Tyler in on a secret to get a ball. Score. It worked and he had a very nicely used warm up ball to show all his buddies back in Pueblo.

I am always pumped when I meet fellow Coloradoans on the road who are travelling to games. Another gal chatted with me and we realized we had been sitting rows away from each other in St. Louis. Cool thing was she is a New York Rockies fan!

Six wins in and I know it can stop at any time, but for this Rockies fan, this streak is some sorely needed water in the parched dessert landscape.