There are a lot of things to do in Los Angeles. Beaches, Hollywood hills, star watching and then maybe catch a Dodger game. Like I said in my last post, the joke on Dodger fans has always been they come in the third and leave in the seventh. I’m sure the hard core fans don’t appreciate that generalization but it doesn’t just make itself up! The two games I caught at Dodger stadium probably had every kind of fan available- hard core and not so much all at the same time.

The first things you notice driving into Chavez Ravine are the large number of Dodgers paraphernalia on the people and cars coming in. Getting out of their cars, seemingly everyone has some form of jersey, shirt or Dodger cap. White and blue are the overwhelming colors and there is no shortage. You wouldn’t doubt the fans coming in are set up for a game.

with. I wish my computer had been working properly while I was in L.A. because I would have liked to talk with Emma and get her view of Dodgerdom. She’s obviously in the classy Dodger category and a great representative of the team and organization.

Fans I’d like to forget are some of the fans I had the displeasure of seeing in the left field pavilions. I know that when I put on the Rockies jersey and cap I am a walking target for all kinds of comments and gestures. I am a grown man and I have thick enough skin to take a whole lot. What I did not like is when a female or child who happens to be wearing Rockies gear is getting unnecessary comments. That to me is uncalled for and not part of the game.

There were some fans sitting directly behind me who represented the idea of “fun” jeering while not crossing any lines. They were Dodger fans and let it be known, but we could go back and forth joking with nothing kids couldn’t hear or you’d be ashamed to say in front of your mother. Dodger stadium pounds the number in your head to call if your time at the ballpark is being hindered.  After the pitching staff fell apart Saturday and the Dodgers were on a roll, I leaned back and jokingly said, “All this cheering back here is hindering my experience.” Everybody laughed and back and forth it went. Yes, it did not bother me when the Dodgers would make a good play and I’d get a tap on the back telling me that is the kind of player the Rockies need.

That to me is fine and I have no problem with. Watching the LAPD take out numerous people from fighting, I realized there is a good deal of fans in that section who really didn’t respect the game. Honestly, I have never seen so much police presence in one area of a ballpark outside of a playoff game where security is heightened anyway. After talking with a homegrown Dodger fan about the police hauling people out, he commented that I should have been there opening day when they had a 14 person police brawl. That is definitely hindering someone’s experience! I really shouldn’t have to worry about not accompanying a female to the bathroom at a baseball game for what might be said or done.

Sunday, sitting in a completely different section, I met some really great baseball fans who made up for the drunk idiots and comments from the day before.  As the sun got hotter and the day grew longer, fans all over the park were looking to stay cool. The Dodgers were selling blue fans with water you could spray to stay cool. The older couple sitting next to me were spraying each other and letting the fan cool them down. The gentleman put the fan on me and sprayed and I said, “If you’re trying to be my best friend you’re doing a great job,” and smiled. He said,”I don’t care what jersey you’re wearing. It’s a game.”

The fans in general are loud and proud of their Dodgers. Russel and Ramirez can get some great cheering. Manny, most of the times he is up at the plate, is serenaded to chants of “Manny, Manny” and they don’t quiet down a bit when he takes one out of the park. What cracked me up is they don’t think he is perfect either. They know he can’t run and for the most part is a mediocre outfielder. After dropping a ball for no obvious reason, and then not being fast enough to track down a catchable ball, the fans let him know.

The guys behind me cracked me up when they’d yell, “Use your cap Mannnny, use your cap. Stretch it out, you might catch it papi.” They’d follow it up, “That’s okay he better make it up at the plate.” For as much abuse he could take, he also got a lot of love.

Dodger fans are excited about their team and even though there may be the ones who come in the third and leave in the seventh, there is a loyal base who live and die with the team. I’d like to see the day when all fans come with respect and class to the ballpark, but by no means do I think this is a Dodger only phenomenon. There are a lot of great fans in the stadium, but don’t be suprised to run into some idiots because you are wearing the wrong jersey.

As for personnel working at the stadium, majority if not all, were very friendly and helpful. I even laughed when lot attendants would go back and forth with me challenging me on being a Rockies fan. All in good fun, I told the last attendant I’d be happy to see him in Denver over the weekend as it’s only an 18 hour drive. He laughed and said he’d be there. I’ll be looking..

The strangest Dodger fan I encountered was in the bathroom. He made it known that three Rockies fans he had talked to did not know who Garrett Atkins had played for. Waiting to stump me and giving me a know it all look, I just laughed and said, “UCLA first base from ’98 to ’00.. Anything else?” The look on his face was priceless as he studdered and said, “yeah, yeah that’s cool you know that.” Seriously dude, Rocky Mountain Way here, if you don’t know you better ask somebody.

I honestly couldn’t wait to try a Dodger dog. For years I had heard great things about them and I wondered if it would live up to the expectation. Stepping up to the booth, I looked and spotted the Farmer John Dodger dog for $5. They had the all beef Super Dodger dog for $5.75, but for this first time I wanted to start with the everyday variety.

Unlike the D’Back dog, my first impression holding it in my hand was it was warm and felt substantial. This was a good sign. I couldn’t wait to get to my seat and open this puppy up to see what it was all about.

Like a Christmas present, I opened the silver wrapper and set my eyes upon the legendary dog. It was bigger than I thought it would be. All signs were go. The first bite…

Ah, this is good. This is really good. Halfway through the dog I was satisfied this legend lived up to the stories.

No complaints, hands down one of the best dogs I have ever had at the ballpark. For $5, I would buy it again and recommend it easily.

I looked where I could on the level I was on for other food. Really, I didn’t think anything would take the Dodger dog in taste, so I looked for a unique opportunity. There was Carl’s Jr. and Panda Express and I could get those anywhere. I wanted something unique so I was drawn back to the Dodger dog yet again. They had the $5.75 Super all beef and I wondered how big the difference would be. 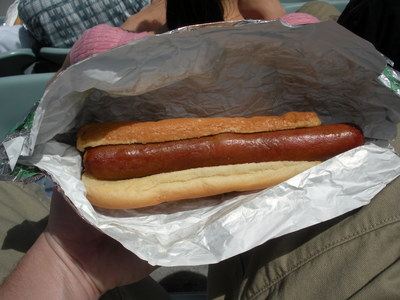 I guess some people might like the idea of eating all beef in their hot dog, but I really didn’t notice so much of a difference to rank the Super any better. I’m glad I tried it and it was just as good as the regular, but I would see no need to buy it again. I’ll save my .75 cents and enjoy the regular.

If you have not tried a Dodger Dog, I recommend it easily. Whoever Farmer John is, he makes one heck of a dog. For $5 it’s on par for cost of any ballpark food and a great filling treat.