I’m not big on rankings because I am more a quality then quantity kinda guy. I would rather be ranked low if it meant great readers and great comments. I appreciate everyone who has dropped by and continues to leave great comments. It is very appreciated. My latest ranking gave me a good chuckle because I thought- It’s fate.

You see #28 is the number of the Rockies opening day pitcher Aaron Cook. The man with the plan and the anchor of this years roster, Cook is a veteran with plenty of good stuff, hopefully more than enough to carry the team. So I saw it as fate that #28 is the opening day pitcher and that is the start of this journey for me. Cook will be on the mound when I watch the Rockies take on their first real opponent and “The Great Experiment” is under way. So who is #28? 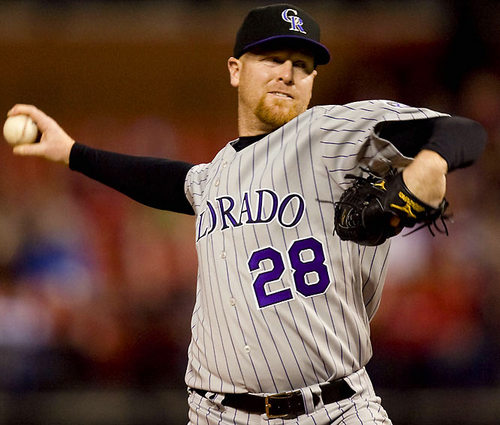 The 2005 Tony Conigliaro Award winner says a lot about describing Cook. The award is given to a Major League player who has overcome adversity through the attributes of spirit, determination and courage. Cook has those attributes and more.

In 2004 while on the mound, Cook felt dizziness and was taken to the hospital. Doctors realized he had an odd condition where a rib was pressing against a vein creating life-threatening blood clots. Forget about pitching, the man could have died. But that is not Cook.

Almost a year later, Cook found himself back on the mound trying to reclaim the career he had almost lost. He won his first six consecutive games in 2005 and was an inspiration to anyone who faced great adversity. You couldn’t help but root for the guy to stay strong. His  ability to get groundball and fly ball outs is a thing of beauty and fans wanted more.

In 2007 Cook was a strong force in the Rockies lineup and was helping the team get to the World Series when he suffered a season ending oblique injury in August. Another injury and a sad way to go out. Many wondered if he could come back yet again.

Last season, as seemingly the whole team was injured, Cook not only came back but was the rock. You knew during the dark injury-ridden days of ’08, when Cook was on the hill it was going to be a bright day or at least the chance of one. He went 16-9 with a 3.96 ERA and was voted to his first all star game. You might remember that. He was the guy who worked out of a no-out bases loaded jam in the national spotlight. That’s Cookie.

The closing of spring training is near and fans can have high hopes Cook will not only be the number one starter, but the blood and guts veteran will be the attitude the Rockies need to take the division. So it’s fitting today I’m number 28 and #28 is leading the charge for hopefully a memorable season in more ways than one.