Say hey blogging world. Sorry for the absence, but I am here to post and I wanted to show a wicked picture of me shredding some serious snow after the recent blizzard. I’m way cool.

Okay if I had you fooled that is NOT me. But I did go boarding and rather than a full diatribe of crap you probably don’t want to hear about. Here is the real me.

Yeah that is the real me. Face down in the snow. If anyone should ever want boarding lessons I can teach you the best way to fall and look cool. Anyone can fall, but falling like you have just jumped out of a moving car and living to tell about is a skill of mine. I am very skilled. Why board then? Well, if you have ever caught a wave and felt the motion of the moment it’s actually very beautiful. Since I don’t have the ocean like I did in times past, I try and make the most of the snow and it’s very similar. Cruising along shredding the snow is like cutting the water of the wave. One exception. SNOW HURTS MORE. Not always, but I knew since the blizzard had drawn in some fresh powder it would make the beating more bearable.

I guess tell that to my elbow and rear and backside in general. It’s all good though. Colorado is a beautiful state and when not hiking it, it’s fun to shred it in the winter wonderland. I met the coolest people today and a positive attitude and appreciation for the day can make for good times. Here’s an action shot so you don’t think I’m a total crash dummy. 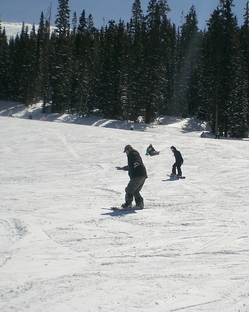 But onto bigger things and better things. I am looking forward to the warm weather for the Rockies opener against the D’backs in the not so near future in Phoenix. Yes, yours truly will be making the trip with hopes for a Rockies winner. I hope to be up and running on the internet soon, so be sure I will keep you all updated.

For those who asked about the first page or “prologue” I had spoken about, I was going to run it here on the weekend. It’s just something I put together and I am fine sharing it and hope you enjoy it. I will be back soon to report on all things Rockies : )

“We were gone three of four weeks. Lived on bread and beefsteak the whole time. We’d take up a collection at the games-pass the hat, you know-and that paid our expenses. Or some of them, anyway. One of the boys was the cook, but all he could cook was round steak. We’d get 12 pounds for a dollar and have a feast. We’d drive along the country roads, and if we came to a stream, we’d go swimming; if we came to an apple orchard, we’d fill up on apples. We’d sleep anywhere. Sometimes in a tent, lots of times on the ground, out in the open. If we were near some fairgrounds, we’d slip in there. If we were near a barn, well…” Sam Crawford- HOF baseball player describing playing baseball in the 1890’s before he went pro, in the book The Glory of Their Times.

I wonder if people will ask when the point came I realized I had embarked on something special?

Sitting in a small back room of a 100-year-old home, in the late evening hours of March, I have made the realization.

The room, just two days ago, was filled with boxes, clutter and unemptied treasures from a cross-country move. It wasn’t me who came from St. Petersburg to Colorado, but it was me who was tasked by fate to emptying the boxes and finding the character in this space. A nomad without a home, I found a place to help and be helped.

One light, of the two small halogens in the fixture directly above me, is burned out. It shines dimly over the large wooden table that seems out of place. The table is strangely intimate and comforting at the same time. The original light fixture sits to my left on the wall with wires once used, now dangling, leaving an open crevice and reminder of what once was.  I wonder how it once lit this room. I sit underneath the newer fixture and watch as the glow from the light turns the lightly painted walls a shallow green.

To my right, is a large picture window that shines brightly during the day but casts a dark reflection in the evening. I look over to the reflection and it’s me but somehow not- someone I’m just beginning to recognize again. Just a few months ago I had my own home. I would wake up near the crack of dawn and fulfill my corporate duties with little excitement, just another cog in the machine. Now, I was watching the days grow closer before I would embark to cross the country in search of its people and its baseball pastime.  Writing in a strangers’ home, I was becoming less of a stranger every day, even to myself.

A shaman from Belize stares over at me from his frame on the wall. He is a black man with a curious looking smirk. No doubt wise, I wonder if he knows something I don’t. No matter, because I look back into the window reflection and see my body slightly hunched and tired with my own smirk. My smirk comes from a satisfied place within and I’m not worried.

The wooden bench that I am sitting on is built into the wall and reminds me of the close quarters of a ship. It takes me to a time when the early inhabitants of this home used every ounce of space to their advantage. The wood of the bench begins to hurt my ***. But even with the pain, I know I love this bench. I think it’s my first bench crush. It fits me just right. Yes, it does.

The shiny black laptop opened on the table and plugged into the wall seems out of place. A plain sheet of paper or even an old typewriter would seem more appropriate. I hope the broken outlet doesn’t short out the pretty laptop though. This would be a sad development. I laughed today when I plugged in the laptop and the main breaker popped- never popped a breaker with a computer before. Maybe the original installers never envisioned fancy space machines needing energy in this kitchen. The fancy electric machine called a refrigerator would use all the energy.

The floor I had scrubbed yesterday is already dirty. I look down and I think one of the dogs had an accident. They are small and loveable dogs, rat terriers, and an accident is an accident. Yep, that yellow stain is definitely an accident.

A late night in March-while the wind blew and the old plastic roof of the porch slapped the wood rafters, like a large knock on the door- I realized it’s a different day and this is the start of something very new and exciting.

Tomorrow, I am going to look at that plastic roof of the porch and laugh at its character. It’s old and broken and makes a lot of noise, but it just needs a little love and it is part of a house lending a lot of love to me and my journey. The wind from the softly blowing snow keeps whipping up the broken roof waking the neighborhood. I’m sure of it, and I realize it is going to take some patience first, trying to sleep while it crashes, before it ever gets fixed.

Baseball and America here I come, but in the meantime a little time in a house with this much character, only adds to mine.